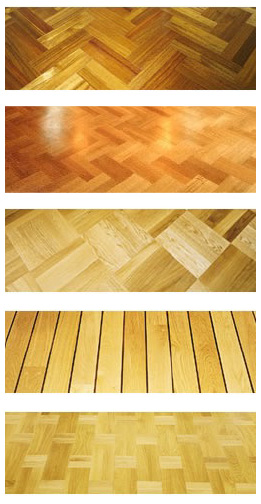 Parquet flooring is recognised by most people as being small pieces of wood (usually, but not always, hardwood) set out in a pattern as a floor. Parquet is usually laid over flexible subfloors such as joisted floors covered in boards or sheet material such as plywood or chipboard.

Patterns may be as simple as plain battens laid as a herringbone, basket weave, ship’s deck, brick or Dutch designs. See images right.

Herringbone is perhaps the most traditional pattern in the UK, and can be laid in either single, double or triple block pattern designs. Herringbone is called ‘fischgraat’ in Northern Europe and ‘parquet d’anglais’ in France.

Parquet, along with inlays (borders, medallions, other species of wood etc.) and other custom designs can give a wooden floor an elegant and exclusive look.

Made up in a variety of sizes depending on the wood species. A traditional Oak Prime European block would be 230mm length, 70mm wide, 20mm thick.

For a free no-obligation consultation and estimate please call 01903 217229 or complete our enquiry form below.